Preparation Is Key: How America Can Get Ahead of Q-Day By QuSecure, Inc. 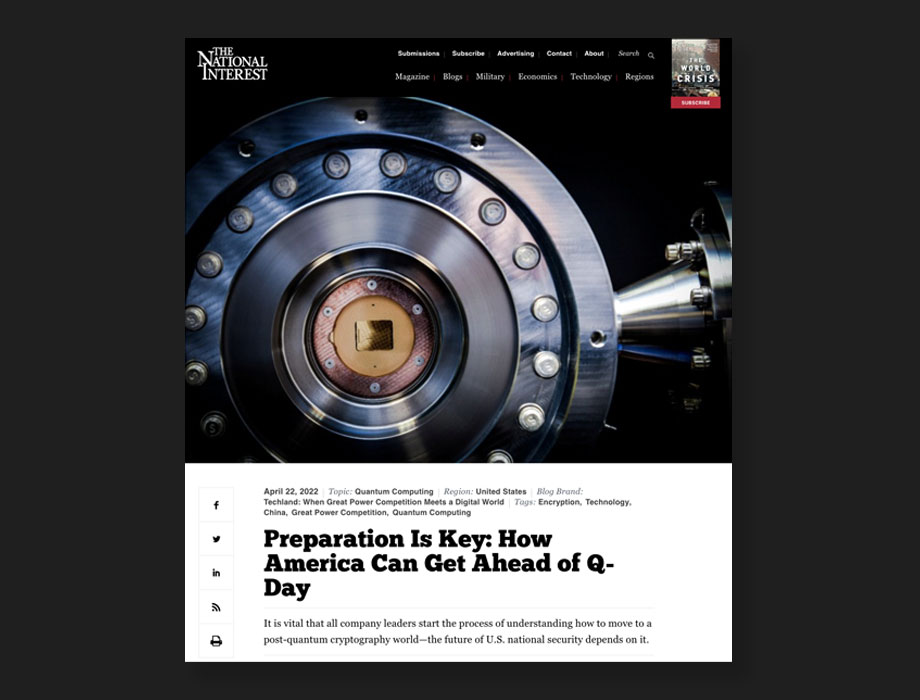 This article was published in The National Interest on April 22, 2022, and written by QuSecure Founder, Board Chair, and COO, Skip Sanzeri.

Referring to Q-Day, the day when quantum computers are powerful enough to break our current encryption, Arthur Herman, senior fellow at the Hudson Institute, once wrote the following: “Q-Day is the term some experts use to describe when large-scale quantum computers can factorize the large prime numbers that underlie our public encryption systems…” Ironically, the phrase “Q-Day” was also used to test the first atom bomb in 1945.

Today, most of the world’s digital communications rely on standardized encryption to protect against classical (the computers we currently use today) computing attacks. This encryption, sometimes referred to as public-key encryption, PKI (Public Key Infrastructure), RSA (Rivest Shamir Adleman), or ECC (Elliptic Curve Cryptography), is based on a single transaction of factoring a large number. This mathematical equation is all that stands between our data and our adversaries.

For example, the numbers three and five multiply into the number fifteen, and thus they are the factors. Factoring refers to finding two numbers that multiply into a much larger number. With large numbers, it is a complex and essentially impossible task for classical computers to figure out; for example, 14,378,234 has factors of 806 × 17839. So far, all public-key encryption schemes have done an adequate job of protecting our data and communications, and we have also been able to increase the size of the numbers to be factored (also known as the key sizes) to stay ahead of the curve.